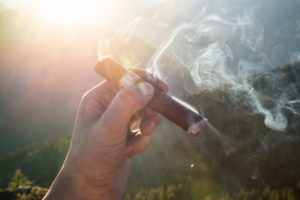 Some time ago, I stepped outside to enjoy a cigar between rains, storms and clouds. After a heavy rain, everything smells a little damp and the droplets of water that are coating everything catch the light. It was real nice out and I wasn’t the only one enjoying it.

An older couple was out walking their dog, and right as I lit up they stopped and the woman asked me if I knew that smoking kills.

No fucking shit, I said. Well not actually, I replied that I was aware of the risks, assuming that they would drop it and leave me to my smoke in peace.

Nope. Extra nosey neighbors is just one of the many joys of living in the Communist Republic of California (I kid, mostly). She wanted to know why I smoke if I know it could kill me.

It’s a fair question, but the answer isn’t any of her damn business. Family and friends, acquaintances even might get a real answer from me. Complete strangers intruding on my pristine Padron 3000? I told them that was my concern, not theirs. Praise the Lord, they fucking left.

I’ve seen all of the PSAs. I know all about the dangers. Cancer here, cancer there, cancer fucking everywhere. But smoking a few cigars each month isn’t like a pack a day habit in my mind, so the benefits far outweigh the risks.

And if you’re a pack-a-day man who always has his Marlboro Reds handy? Well I tip my hat to you, sir. It seems like everybody on the planet has the right to judge you if you want to light up some tobacco, or chew it for that matter. But can we judge the millions of Americans who are overweight when we see them lining up for some fast food?

If you enjoy being fat, or you enjoy food enough that the price you pay (being fat) is worth it to you as long as you can enjoy yourself – then so be it. If you like to smoke, the same principle applies. It’s your fucking life, and if you consciously choose to live the way you do then I’ve got respect.

But if you want to quit smoking but just cant find the strength, or you’re desperate to lose weight but keep falling off your diet plan so you quit on it? No respect for you, not for quitting on what you want.

Seize what you want with a vengeance. If it’s a new body, then go out there and conquer it. If it’s a cheeseburger then make it the biggest, baddest, baconcoatedest cheeseburger on the planet. If it’s a cigarette, smoke that fucker down to the hilt. If it’s what you really want, take it. Its yours.